This afternoon, Shieldhaven linked me to This Nifty Group Plan Thing, which seems like a whole lot of fun and festivity, and a thing I'll like to do. For me, this is a lovely slice of nostalgia, as my dad used to run this map as part of his half-Qasqueton & other 1e material, half homebrew dungeon. As Shieldhaven mentions, we are discussing having the dungeons be connected in some way, which should be fun. In the interim, here's the write up from the original page: 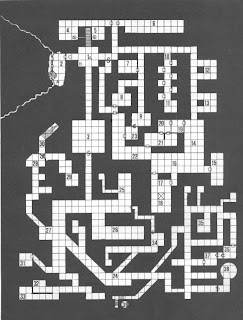 Most people that have been playing the game longer than, oh say... 15 years should recognize the rather iconic map above. Even those of you that may have cut your teeth on 3rd edition have seen it presented there. It is, of course, the dungeon originally provided in the AD&D 1e Dungeon Master's Guide. It and the accompanying sample of play have together long been a sort of touchstone for me in the way that things like Village of Hommlet, In Search of the Unknown, Bargle & Castle Mistamere or Keep on the Borderlands are for others.

I realized something about this map and I recently. Despite it's importance to my early understanding of the game I've only ever used it for off-the-cuff, ill-prepared ventures. I've never actually sat down to stock and prep it like I now normally do. That's rather a pity, I think, because it's a well-constructed level. That secret door in room 3 (hiding somewhat in plain view and challenging the party to put the clues together to find it) is a prize in and of itself. Overlook it and you've got only a handful of standard 1st-level-dungeon-looking rooms on the top half of the map to explore. Discover, it though, and the whole level opens up.

Beyond room three one can reveal the nooks and crannies of those odd passageways and the weird little side rooms whose overall layout and construction beg the questions "what?" and "why?". Why this little bit here and that narrow passageway to nowhere there? What earthly (or unearthly) purpose is served by the three 10' square rooms that terminate the narrow halls in the south-east quarter? That series of rooms beyond the secret door is just dying to be stocked and described, is it not?

So here is what I am proposing to do and this is where those reading along can come into the picture if they so desire. I'm going to stock that thing room-by-room here on the blog at a rate of three rooms per week starting next week. I'm encouraging those reading this to do the same. At the end of this process the world will have (hopefully) several stocked dungeons based on a single, iconic map. The differences and similarities between them can be an interesting statement on the game and its participants.

I offer only some simple guidelines for this venture: