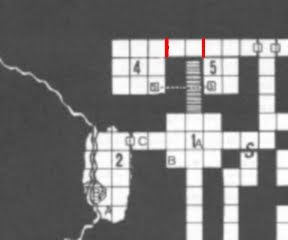 I'll copy here the rules that Shieldhaven is using in his version of the dungeon, which is connected to mine:

For the creation of this dungeon, I will be doing the following.
1. Using 4e rules.
2. Assuming that the scale of this map is 1 square = 10 feet. 4e, and 3.x to a lesser degree, requires space to move. The game is less fun when all of those lovely movement powers are unusable because there's nowhere to stand. Also, the tactical decisions of positioning go out the window. (If you hate minis combat, you won't understand this reasoning, but you're probably also not playing 4e.)
3. Connecting my dungeon to the dungeon Shieldhaven is writing. This particular entry is based on his above-linked version and our various conversations, and things may get changed around a bit as writing goes on.
4. Writing in story goals. While I'd like any DM to be able to plug this into a campaign without hassle, I think that defining spaces for those plug-ins and showing some cool ideas of my own are the way to make that work.
5. Rejecting any obligation whatsoever to use symbols on the map for their original purpose.
6. Statting fights for five characters of about 6th level.

The core conceit of connection between Kainenchen's crypts (The Prison at Three Gates) and Harbinger's halls (The Dungeon of the Three Deceits) is that this dungeon, the one I'm writing, is connected by certain psychic strands. Barriers in one dungeon may be removed by solving a puzzle or winning a fight in the other. The specific do A to achieve B connections are the main things that I expect to see change as we go, because we haven't written everything before writing everything. See the tag at the bottom of the page that says, "you get what you pay for?"

1. Six magical daggers are spread through the two dungeons. Each is imbued with one energy type. These daggers are also shaped to be keys to a certain very unusual lock.
2. There is a very powerful, very dangerous creature called the Living Shadow of Ugrazhe that has been fragmented into six beings, and can only be destroyed while in this fragmented state.
3. By activating the six waystones, portals to a heretofore-undefined Elsewhere open, and the dungeon becomes a travel node for portals.


Rules of Travel Between the Dungeons

The locations with what is traditionally a "staircase" symbol - rooms 1, 30, and 39 - are stable lines of travel. When traveling across a stable strand in either direction:

Background of the Prison

Part of the plan here is to make something that is easy to plug into whatever campaign, though for my part, I generally design dungeons to be the whole, or at least the centerpiece, of a given game. I do believe strongly that players need reasons to care about places, and they should have interesting histories that players could potentially know something about. This is largely turning out to be a statement of intent, I'll get into details later. But either way, the place is an old, dark and sinister prison. I'm sort of seeing it as set near the ocean, possibly near a delta inlet or somesuch.

(In this instance, the 'staircase' symbol is both a stable strand and a staircase.)
This is one of the two 'official' entry points to the prison. One comes down from the stone admittance tower aboveground by way of the long staircase in the north, which leads to the room marked 1 on the map. There are 4 10'X10' holding cells in each corner with bars of wrought iron and heavy padlocks (DC 15 Thievery). Three of these cells are empty but for a hard, wooden bench, a battered tin plate, and a larger metal bowl. There are metal plates in the back walls of each, above the bench, where manacles were at one point attached; the northwest and southeast panels still have pieces of shattered manacle dangling from the plates. The fourth, where 'B' is marked on the map, contains a skeleton lying on the floor, ragged pieces of cloth still clinging to its frame. Searching the skeleton yields a sunrod and a couple of silver pieces (DC 12). Down one ratted pantleg (DC 17), there is a throwing knife-blade with a blue stone at the base of it, lashed to a stick with a bit of sinew. It is identifiable as a throwing-knife +1 (10 Arcana), and also something else (15+ Arcana) which can't be quite placed, but (20+ Arcana) perhaps something like a key.
On either side of the staircase, there are stone stands, the tops are carved into gargoyle faces with wide, gaping mouths and obsidian eyes. A DC 12 Arcana check shows a magical aura emanating from the stands, 15+ indicates that there is something like a gate or teleportation magic involved, and it's kind of icky, a roll of 20+ identifies the energy as necrotic and lightning, and gives one the indication that it is some kind of magical switch. A DC 12 perception check shows that there in a thin, horizontal slot in the back of the throat of the left hand gargoyle mouth. On a 17 or better, the PCs find small pressure blocks in the bottoms of the mouths. If both are depressed at the same time, the stable strand activates, and a sheet of wavering, opalescent-black energy conceals the hallway. If PCs search here, they can find small stones or use fragments of bone from the skeleton in the corner to use to hold down the buttons; about 10 copper pieces will work as well. Passing through this field takes the PCs to room 1 of the Dungeon of the Three Deceits. Also, it destroys whatever was in the mouths (assuming it's non-magical material like small stones; if they use something magical, then it scores it black, but doesn't destroy it) holding down the pressure blocks, reducing them to ash. If the PCs are holding the blocks down when someone passes through, the gargoyles deal 10 Necrotic and Lightning damage to those PCs. If they do it again, it will do the same amount of damage, and grant vulnerability 5 necrotic. Subsequent attempts do not stack this vulnerability.
If the throwing knife found above is inserted in the slot in the mouth of the left-hand gargoyle, it fits, but nothing obvious happens.
In the east wall, there's an alcove in which a tunnel has been hollowed by crude hand-tools.
Room 2
On the other side of a rough, rocky tunnel, this natural stone cavern allows a stream of brackish water in through the north wall, where it widens into a pool and seeps out through the southern wall. The water is very shallow, not more than 3 feet deep at the deepest, and tastes acrid and salty if drunk. In the center of the north wall, it looks like the tunneling continues, but stops about 5 feet in. The aforementioned crude implements lie on the floor, any wooden handles rotted away and the blades rusted.
Digging in the cavern wall will trigger a stealth check on the part of whoever does it (DC 17); upon failure, this will wake up an angry Geonid, and 3 level 4 lesser Earth Elementals. A perception check at a DC of 25 reveals the presence of something living in the rocks.
Near the pool (A), a black, somewhat glittering and thready material clings to the stones in fragile pieces. Perception or Arcana (DC 12) reveals it as nightskien.
Room 3 will belong to a later update.
Room 4
The red lines in the hallway leading up to here are heavy, barred iron doors with locked gates, much like the ones to the cells in room 1. A DC 15 Thievery check will pick the locks.
The chamber itself contains six 10'X10' cells with heavy metal doors of solid steel. Each of them have a narrow slit at about eye-height, with a sliding panel over it. Each door has a numeral 1-6 scratched into it. If the doors are locked, it is a DC 20 Thievery check to pick them. The door to cell 5, in the south-east corner, should be locked; it contains a rough-hewn tunnel to room 5.
And I will get to room 5 later, as I've got to dash the hellz out of here. Peace!

Posted by Kainenchen at 8:03 PM