Two weeks out of date, alas! But with good reason-- Shieldhaven and I were out of the country for a weekend, and friends getting married on a tropical island do take precedence. Not that there's been much to report, game-wise... I've gotten to disc 2 of Shadow Hearts, and Haven and I, with the help of one of his co-workers, Spirofin, managed to make it to the 3rd tier of depth in Spiral Knights. Which is a ride we are not even a little bit tall enough for. Time to work up to that 5-star gear, which will require a profound investment of time, money, or both. Which is a difference in philosophy between Haven and I-- he will Never Ever Pay Real Money For a nominally Free To Play Game, while I will apply Arcade Logic: that is to say, I am having a good enough time that I would totally feed quarters into this if I were in an arcade, so dropping 10 bucks on energy to craft faster doesn't bug me. I want to write about micro-transaction models and De Biz more, but... well. Time. We'll see.

Thank goodness it's not pinball. My Biggest Weakness!

Also, there was Arcana Evolved the weekend before last, a short session. We spent the first half-hour or so of the game addressing the question of whether we'd be charged, and how much, for using the Library of Eradnos (sp?), to which we'd finally made it last session. The answer was that they'd accept payment in trade, which, luckily, people who weren't Basel took care of, because I think they have Magisters to do... well, pretty much everything she can do.

We didn't have time to trigger the fight with the Rune Reaver before Haven and I had to leave for the Eclipse One Day, though we came up with some pretty nifty plans to fight it (three cheers for access to seventh level spells, and the Dragon Template!), so we spent the rest of the time chatting with the Rune Angel who had come to help us fight it. There was some discussion of whether or not she'd give us info as to the plot macguffin that brought us together, which boiled down to... well, sort of but not really. Self-directed... stuff isn't really the point of this game, though. It's more... well, here's the stuff that is happening, and we can react to it or not, mostly through where we decide to go. That said, helping to defeat this Rune Reaver thing is pretty cool, while I'm still at a loss as to the whole spreading cold and what we can do about it. Though we've apparently done some! Which is good! Stupid ice devils.

Which brings me to the Eclipse One Day! That was pretty darn excellent, all told. They rented Safety Wolf; a paintball facility in Conyers, GA. It used to be a cheap-o hotel, and now is a creepy, multi-room, no air-conditioning hellhole that was the perfect place to take down a horrible terrorist and yes. Of particular note were some utility boxes they set up, where mucking with them with a number of skills, including Security Counter measures, Energy-tech, and the like produced different results, and combined with info from a computer that the hackers had to get into. It was _awesome_. And there was much fighty. There had been a conversation earlier that day about how NPCs didn't use guns often enough; yeah, that was definitely not the case here. So many guns! The only thing that would have made it better would have been the lights flickering, instead of just being turned off.

Also, kneepads. I am wearing kneepads to every event from now on. My knees love me so much for it. And I need to get gel-pads for my boots. So badly. 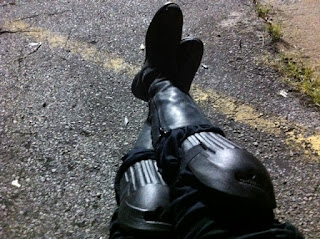 No Mage tonight, as there is too much writing to do-- this post being one thing, and much belated Website Updates for Dust to Dust. And Culture Packets. And, if I can manage it, any of the other posts I want to do. Meh.
Posted by Kainenchen at 1:43 PM